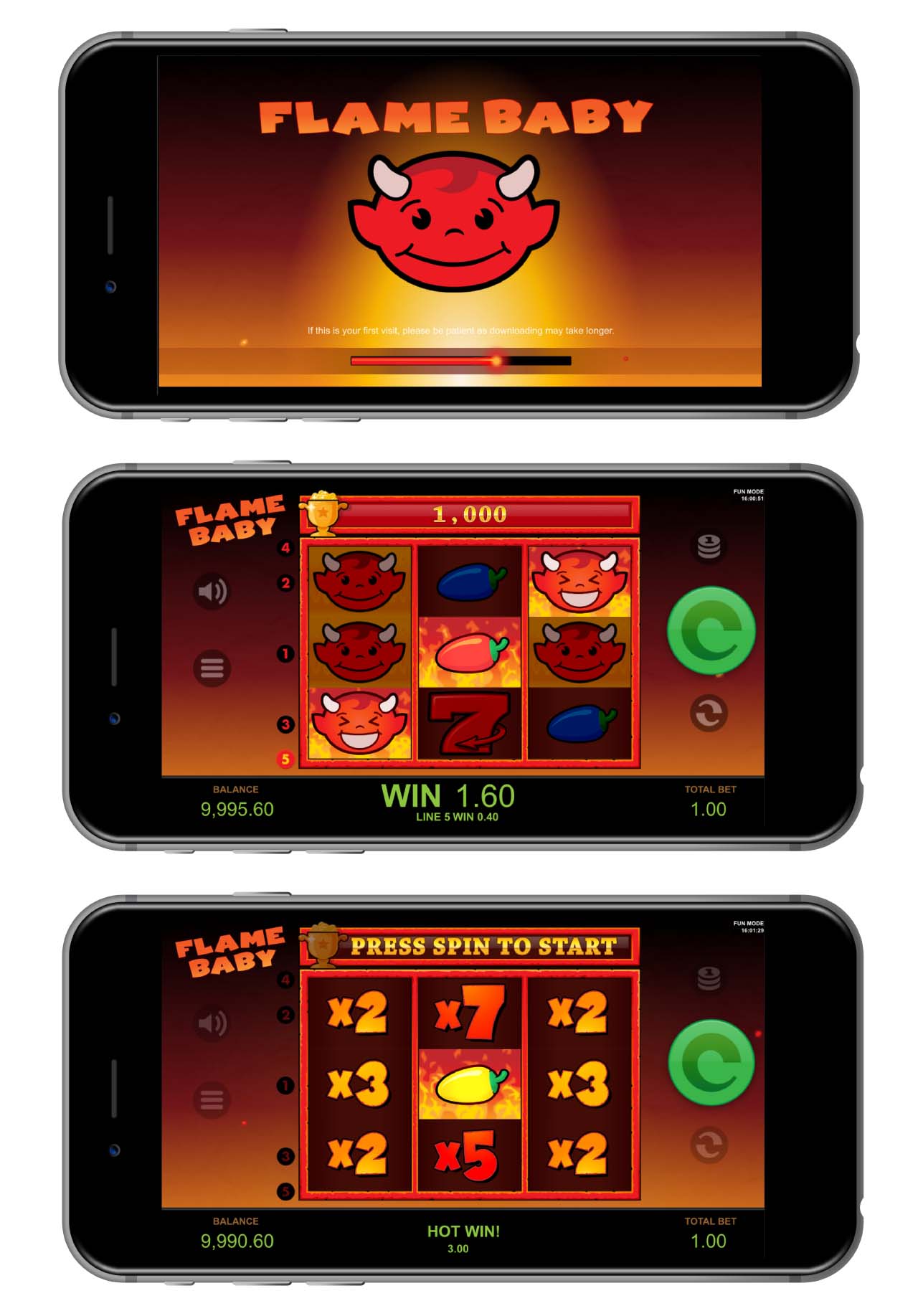 Flame Baby. Three reels and five pay lines. Stacked symbols and lots of wild flame babies. Wins with stacks on all reels gives a spin on the light wheel and the chance to multiple the win up to seven times. The game also includes re-spins. The feature will trigger two full stacks and no win. True Casino 7x. This is a basic and classic casino slot with an extra punch. Three reels and five classic pay lines in the base game. We also added a random trigger two way win function, to give it extra volatility. Stacked wild symbols on all reels and single wild 7x multiplayer on reel 2. In free spin mode the game switches from 5 pay lines to 27 ways to win. The graphic concept is wide, but the game is mathematically balanced for short sessions and targets the ”on the go” player. 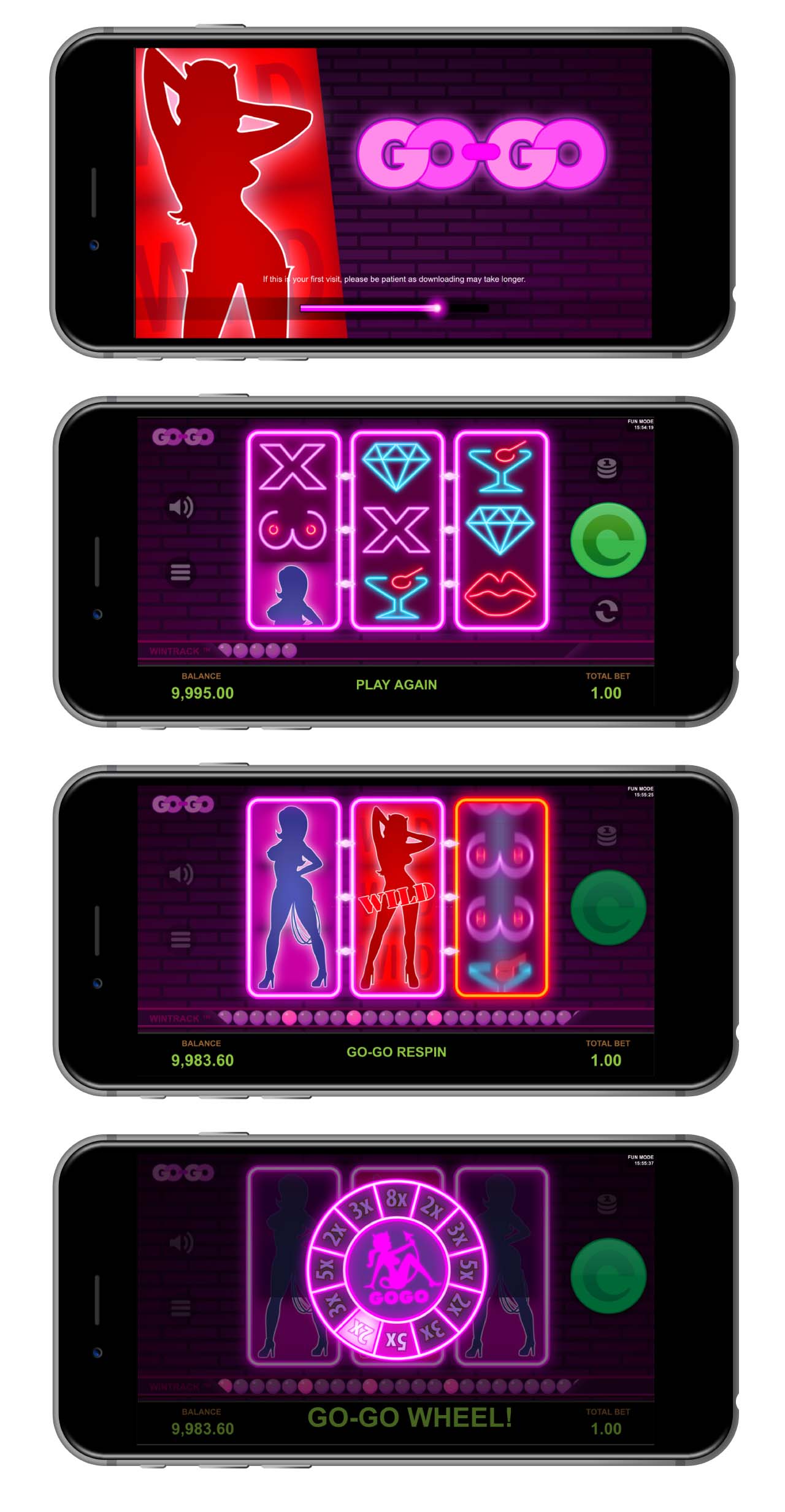 GO-GO. 3 reels, five pay lines and stacked symbols. The game visually puts the focus on the high paying girl symbols. The game also includes Go-Go re-spin that will be triggered at two full stacks and no win. Wins with stacks on all reels will trigger the Go-Go wheel and give the player a chance to multiply the win up to eight times. The target audience for the game is quite obvious. 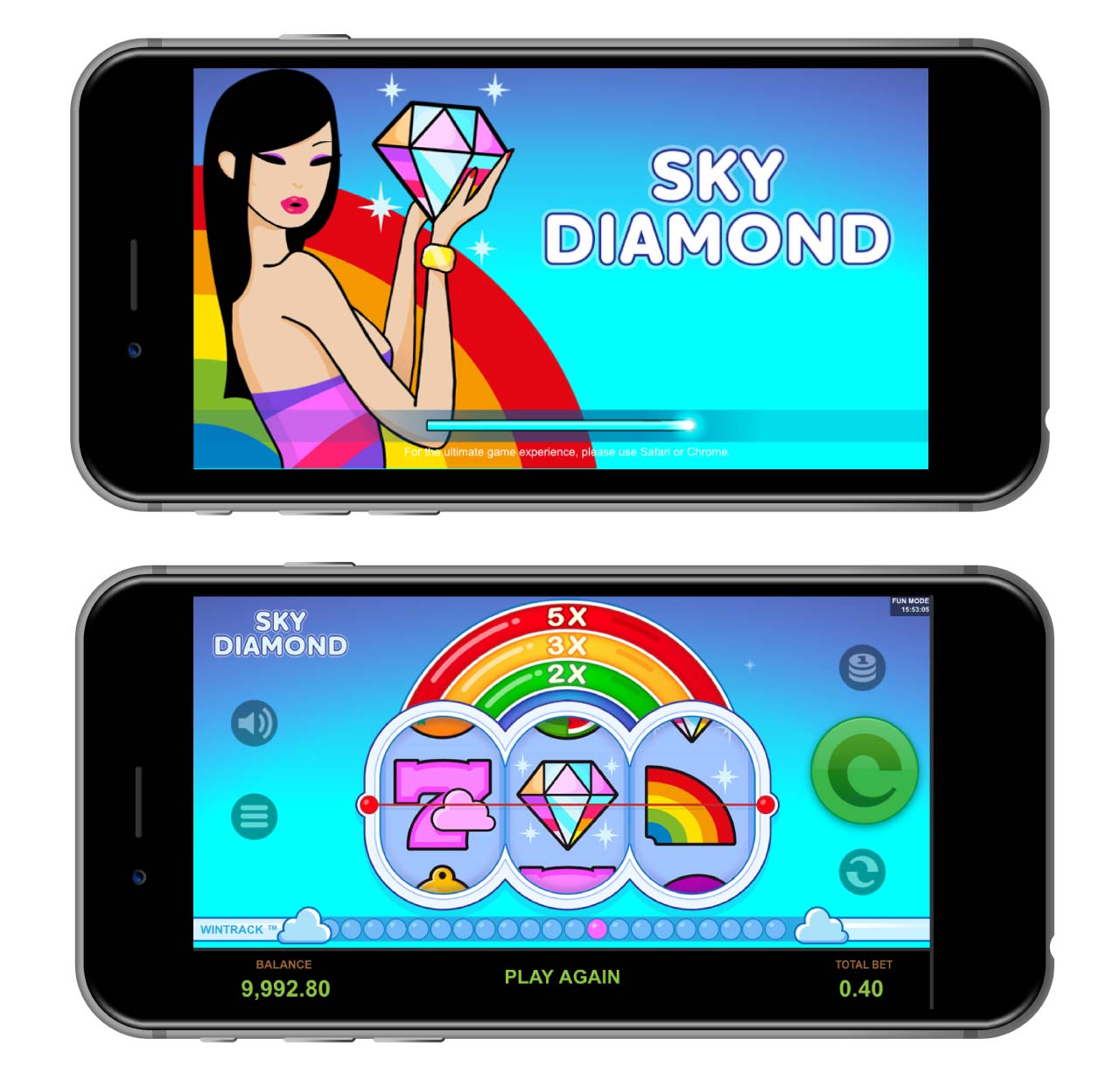 Sky Diamond. Three reels and 1 pay line and classic european fruit slot setup. The rainbow symbol on reel 3 is wild, and in in winning combinations it will start the rainbow multiplier at top of the game (2x, 3x and 5x). The game is mathematic balanced to fit the ”on the go” player in Asia. O Yeah! What more can we say. So here it is, the second game we produced for Aspect. Designed for a young, urban, Asian audience. As always when it comes to Asia, it’s mobile first. High volatility, 3 reels and 1 payline. 3x, 2x,1x auto nudging wilds. You can take it for a spin on 22bet. 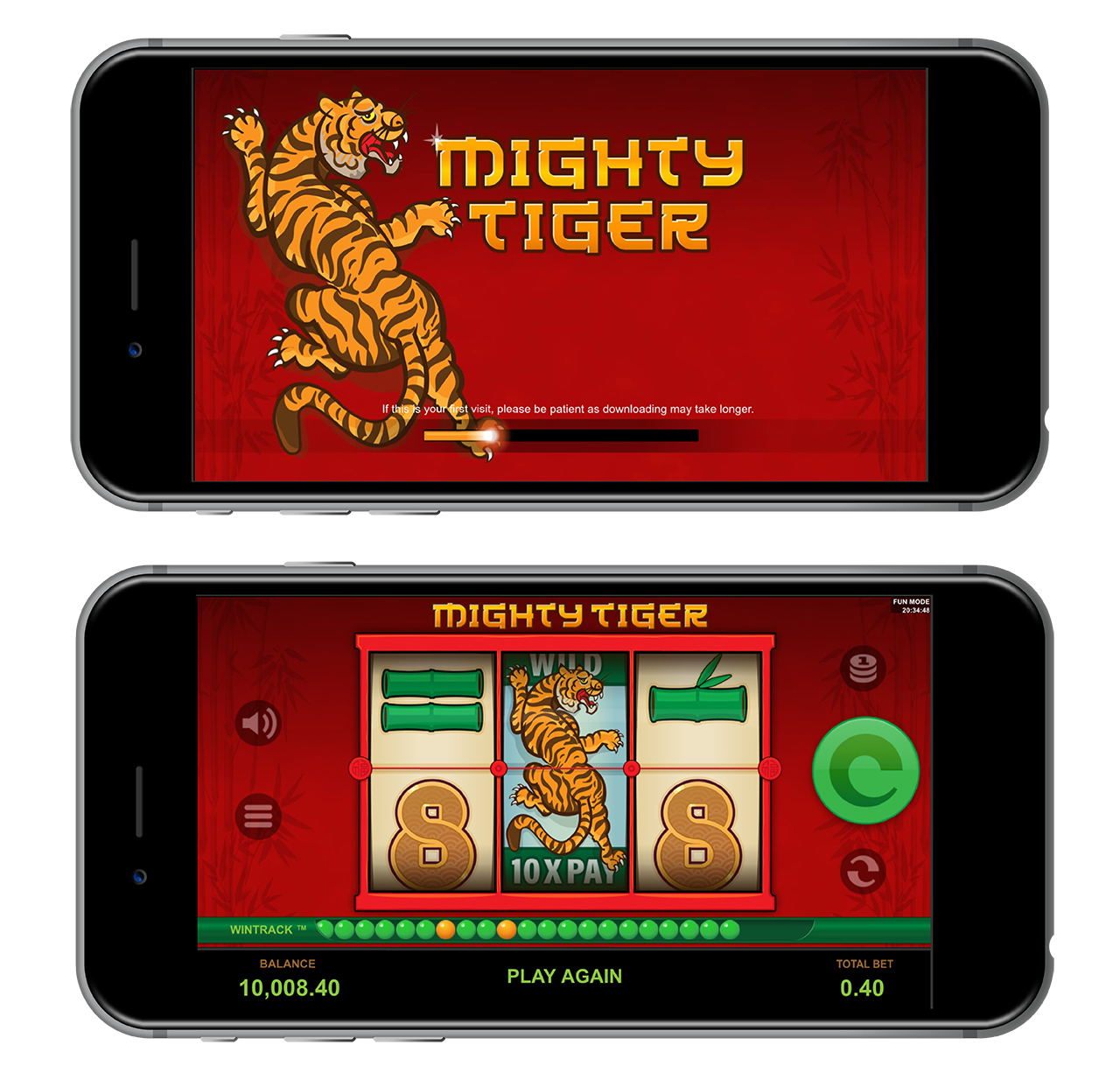 Mighty Tiger is one of the most volatile slot machines on the market. One payline. On reel two an auto nudging Wild Tiger, that also multiples the wins with ten. That means the smallest Tiger win is 20 times the bet. But that’s not all, the game also contains 5x and 2x wilds and regular wilds. It’s also our first game out for Aspect. Try to ride the Mighty Tiger at 1xBet! 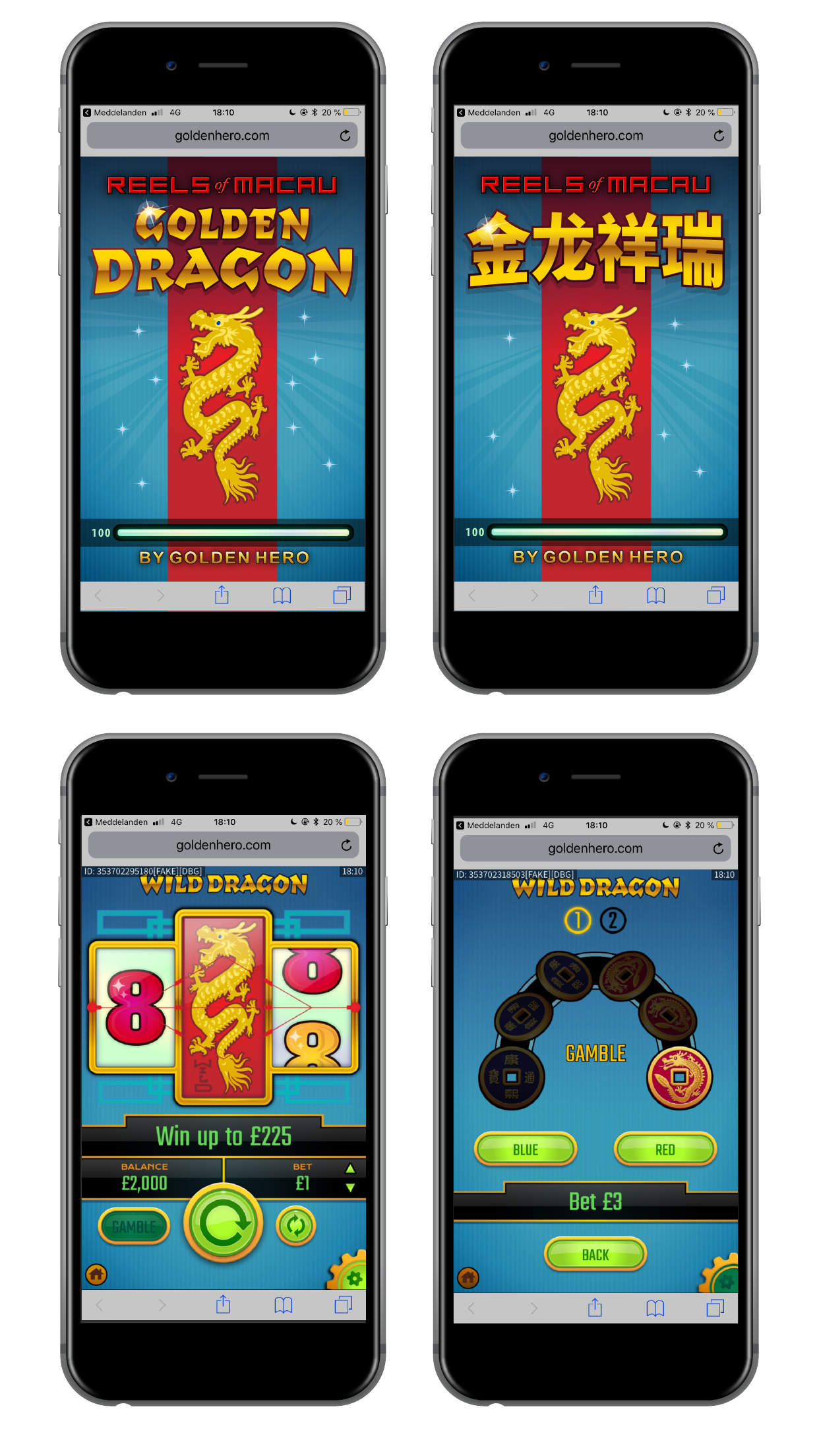 Wild Dragon is something so rare as a diamond lined 3-reel slot. And the stacked dragon on the middle reel, is nudging to increase the fun of the game. The Reels of Macau series interface is specially designed for dedicated gambling in mobile portrait mode. Easy to follow, easy to stake up and down and it’s easy to use ”Double or Nothing” game. This is part of the comeback of the 3-reel slots. Client is Golden Hero. 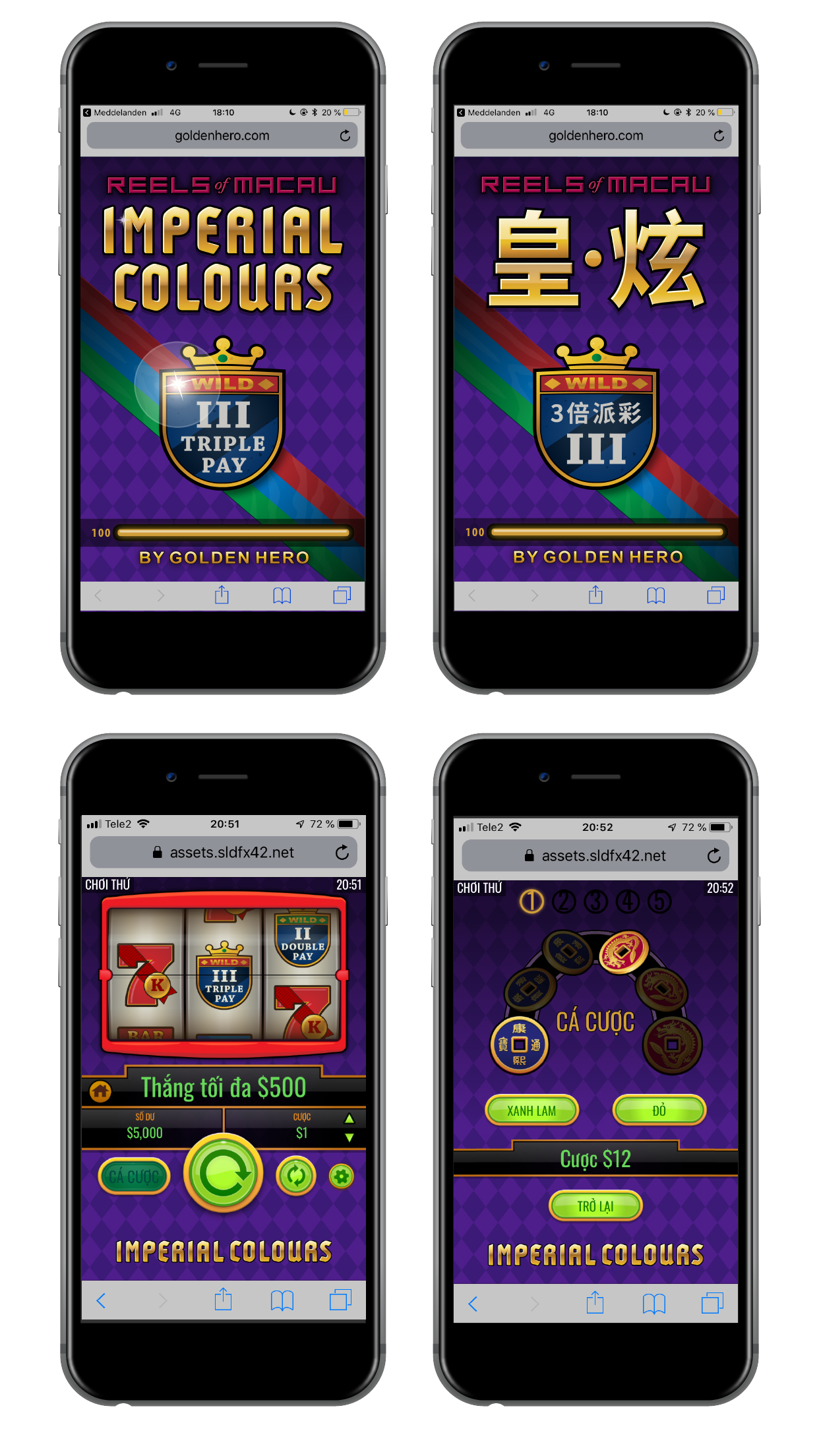 Imperial Colours is a classic but simplified colour game. In addition to the classic three of same symbol winnings, it also pays for three of the same color symbols. Spiced with wild 2x and 3x multiples. The Reels of Macau series interface is specially designed for dedicated gambling in mobile portrait mode. Easy to follow, easy to stake up and down and it’s easy to use ”Double or Nothing” game. This is part of the comeback of the 3-reel slots. 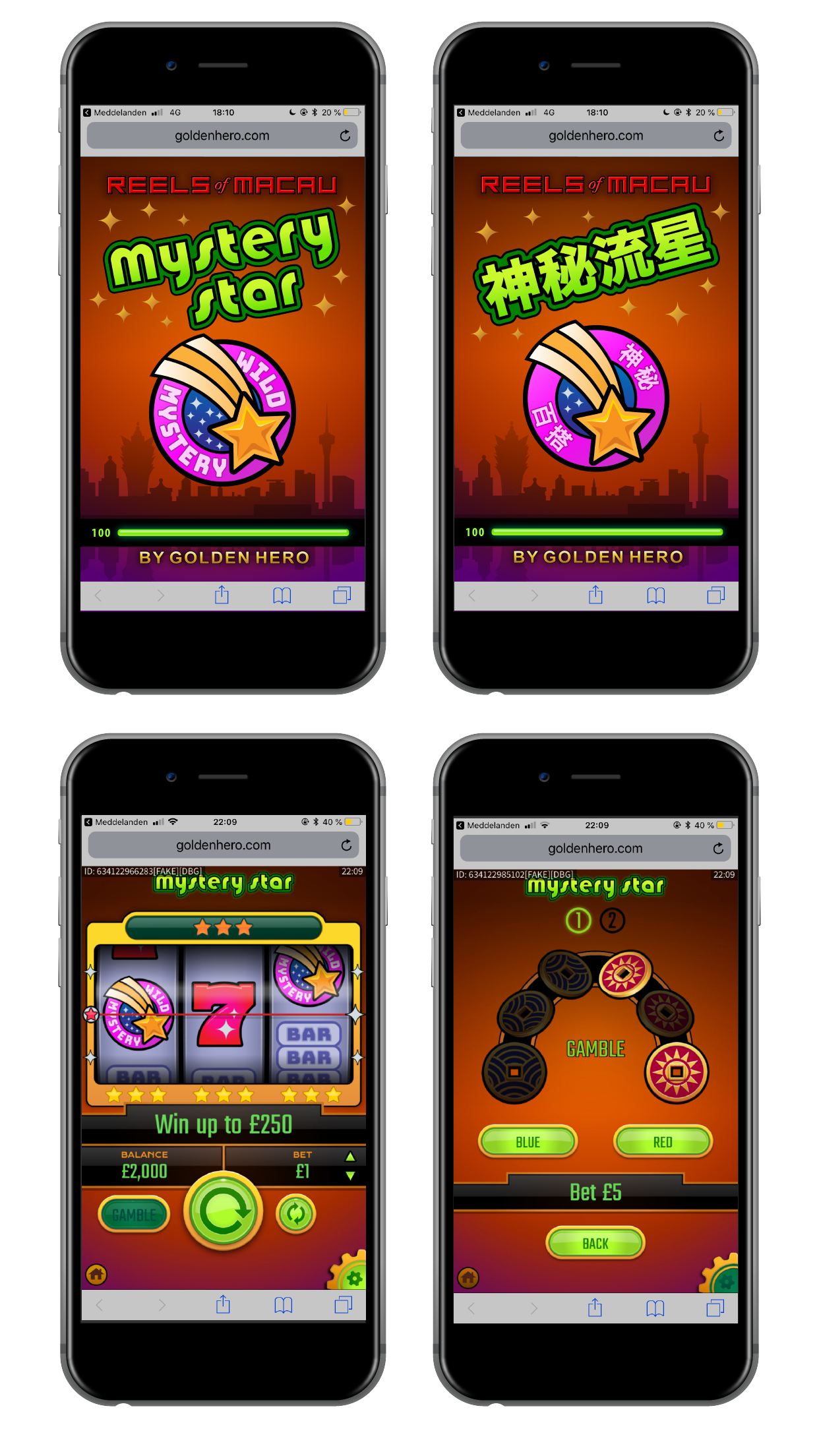 Mystery Star. Three mystery star symbols on the pay line pays the Jackpot. Three stars anywhere in the reel window pays a mystery win. Symbols are designed to put visual focus on the star, seven and cherry symbols. Reels of Macau series interface is specially designed for dedicated gambling in mobile portrait mode. This is part of the comeback of the 3-reel slot. 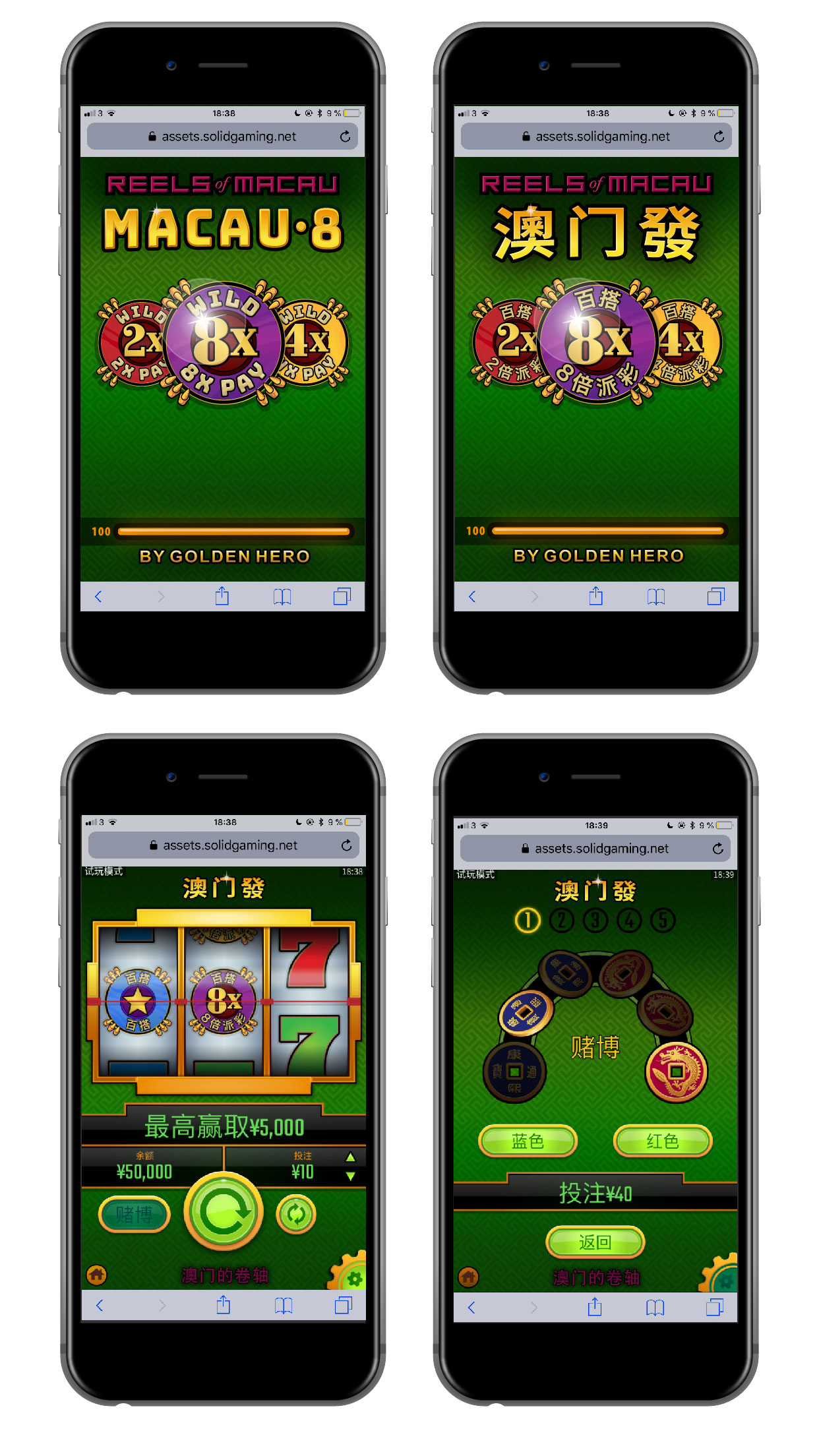 Macau 8. With its stacked Wild multiplier symbols (2X, 4X and 8X) on reel two, Macau 8 game delivers the player a good chance to experience steady streams of high winnings. The Reels of Macau series interface is specially designed for dedicated gambling in mobile portrait mode. Easy to follow, easy to stake up and down, and an easy to use “Double or Nothing” game. This is part of the comeback of the 3-reel slots. 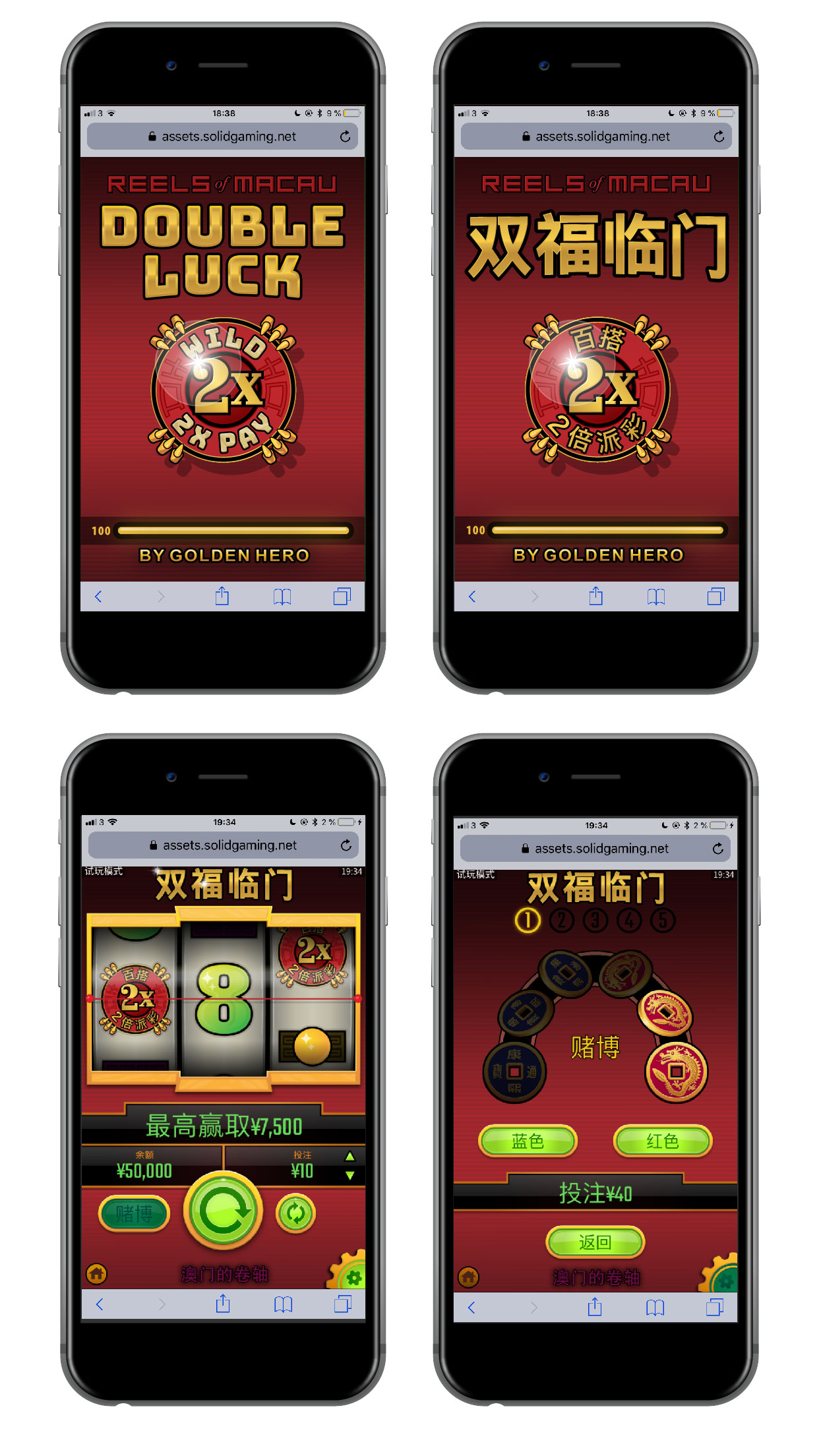 Double Luck takes one of the World’s most proven casino slots concepts into to your smartphone. The Reels of Macau series interface is specially designed for dedicated gambling in mobile portrait mode. Easy to follow, easy to stake up and down, and an easy to use “Double or Nothing” game. This is part of the comeback of the 3-reel slot. 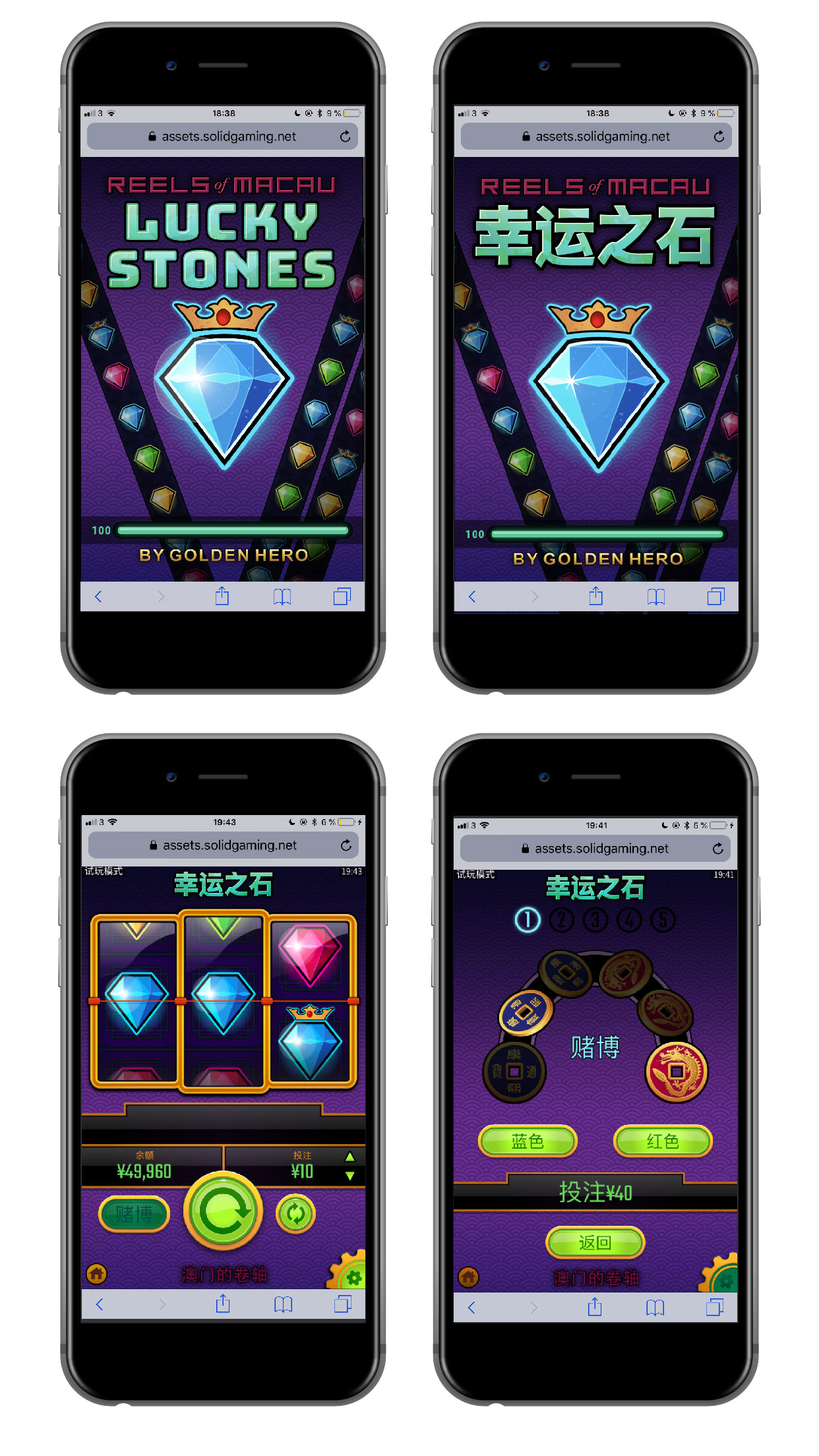 Lucky Stones is the first game out in the Reels of Macau series for Asia. They are specially designed for dedicated gambling in mobile portrait mode. Lucky Stones gives you the thrilling ride of a 4 colours game on one line with a special jackpot crown on some of the stones. Easy to follow, easy to stake up and down, and an easy to use “Double or Nothing” game. What works on the casino floor, works on the mobile phone.

Casino King In Norway players like 3-reels and volatility. Casino King is specially designed for the norwegian bingo crowd and the game is in the top five on the bingo sites at Functional Games. Functional Games with its growing bingo network, is our smallest but most cheerful customer.

Fruit and Coins. Fruit and Coins is a game where the money rolls in. Maria Bingo ordered two new skins to their Aberrant slots in 2007. One of the games was up to us to develop and design. Who wants to play on a 3-reel with one payline, asked one of the managers. But it turned out that Fruits and coins for many years would top the list of most popular games.

Cash and Carry. The Dreamgirl. In 2005 we were commissioned by PAF to design a game for a female audience. The result was historic. The game is still the most popular game at PAF. Customers claim in interviews that the game is one of their biggest reasons to play at PAF. Some say they dream about the girl in the Cash and Carry. The game still generates a GGR at 119 000 € weekly.

Big Splash. This is one of the first online slot machines designed especially for gay players. The game takes place by then poolside in carefree California. Designed for Fruity Bingo – the world’s gayest gaming site.

Parrot Club. Parrot Club was a profile game for the world’s gayest games site. One thing that is certain, is that you must dare to stand out from the crowd if you want to be noticed. But where should the line be drawn before it becomes stereotyped and prejudiced? We were completely in the hands of our experts around us, and when we at the launch were invited to a gay bar, we found that the reality surpasses the poem. Parrot Club is a 3 reels slot machine with 1 pay line.

Masculine Beuty. Its a 5 reels slot machine with 15 pay lines. Masculine Beuty have different bonusgames for every bet levells. We brought in Swedish artist Leif of Sweden to get the artwork done especially for the game, and to capture the right feel. Masculine Beauty is the first gay online Slot machine in the world, and it was specialy designed for Fruity Bingo.

Fisherman’s Jackpot. The year was 2003. Fisherman’s Jackpot was the first slot machine designed for PAF. The game immediately became a smash hit. Over a decade later, it’s still at the top of their most popular games. The graphics were updated in 2007.

King Vegas. King Vegas is one of Paf’s most popular slot machines and runs three machines in one. All games has its own bonus game, that are also included in a dice based “double or nothing” feature.

Hunters Inn. Using humor as a weapon, we got into a game that has ranked at the top at Paf since 2005. Hunters Inn is a five reel slot machine with two bonus games.

Alpine Aventure. Five reels, nine lines and a bonus game where you choose your favorite skier. Commissioned by Paf.

Beachvolley. Beach volleyball was a profile game for Paf. In august 2007, Paf hosted Paf Open; a race in the Swatch FIVB World Tour. This was celebrated with a castle machine and scratch cards with a beach volley theme.

Travel the World. A five reel slot machine with one multilayer bonus game. Designed for Paf.

Nordic Vikings. A five reel slot machine, with a multilayer “man to man” bonus game, that takes you to Valhalla, the hall of gods. The game is designed for Paf.

Fruit Slot. A three reel, one pay-line slot machine with a horse race “doubled or nothing” function. Production year 2004. Designed for Paf.